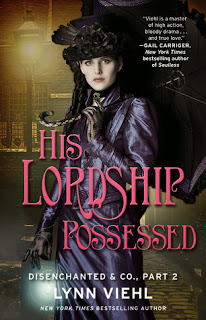 "The second half of Disenchanted & Co.—the thrilling conclusion. In a steampunk version of America that lost the Revolutionary War, Charmian (Kit) Kittredge makes her living investigating magic crimes and exposing the frauds behind them. While Kit tries to avoid the nobs of high society, as the proprietor of Disenchanted & Co. she follows mysteries wherever they lead.

Lady Diana Walsh calls on Kit to investigate and dispel the curse she believes responsible for carving hateful words into her own flesh as she sleeps. While Kit doesn’t believe in magic herself, she can’t refuse to help a woman subjected nightly to such vicious assaults. As Kit investigates the Walsh family, she becomes convinced that the attacks on Diana are part of a larger, more ominous plot—one that may involve the lady’s obnoxious husband.

Sleuthing in the city of Rumsen is difficult enough, but soon Kit must also skirt the unwanted attentions of nefarious deathmage Lucien Dredmore and the unwelcome scrutiny of police Chief Inspector Thomas Doyle. Unwilling to surrender to either man’s passion for her, Kit struggles to remain independent as she draws closer to the heart of the mystery. Yet as she learns the truth behind her ladyship’s curse, Kit also uncovers a massive conspiracy that promises to ruin her life—and turn Rumsen into a supernatural battleground from which no one will escape alive."

I loved Disenchanted & Co., Part 1, Her Ladyship’s Curse and when Edelweiss offered Part 2: His Lordship Possessed I asked for and received a copy.  Then it disappeared, at least that is what I thought happened.  I could not find it on my Kindle.  Of course it did not really disappear because I finally found it two months after it was released.

I was not disappointed in His Lordship Possessed.  Kit and Lucien work both together and against each other in Part 2.  There is a thrill a minute in Part 2 .  Nothing was working for Kit or Lucien and it looked like there would not be another book in the series.   It appeared that everything was lost and then there was a very surprising twist.  That twist really set up the next book in the series.

Most of the world and character building was done in Part 1.  The two parts are really one book so do not try to read this as a stand-alone.  Part 2 was action, action, action and it was very well written.  I look forward to The Clockwork Wolf, the next book in the series.

Simon and Schuster published His Lordship Possessed by Lynn Viehl in 2013.
Posted by JC Jones at 12:30 AM