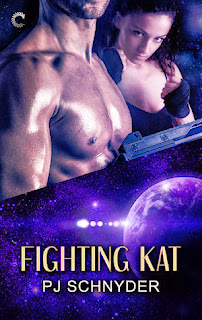 Book two of The Triton Experiment

"Intergalactic mercenary Kat Darah has been ordered to keep her shape-shifting ability a secret from everyone but those closest to her, for her own safety. She’s learned how to control the feral rage… for the most part. But when Lieutenant Rygard’s military unit goes missing, she’ll use every skill she has to find her man.

Lt. Christopher Rygard has witnessed his girl shift, and he still wants her. After Kat rescues him from alien clutches, he’d like nothing more than to wrap her in his arms again, but his first duty is to his men. And half of them have been shipped off-planet to be sold as slaves.

Kat and Rygard will need to form a new team to go deep undercover, posing as gladiators and learning to fight together—not just side by side—in order to survive. In the arena, it’s all about who is the strongest predator."

Fighting Kat is book 2 in the series but it does a great job as a stand-alone.  I have not read book one but had no trouble getting into the story in Fighting Kat.

As a cat lovers if I could shift it would be as a cat.  That is probably the reason I love stories that feature people who are cat shifters.

For Kat Darah shifting to a cat was not a choice she would have made.  She was injected with a drug that changed her DNA and left her with the ability to shift to a panther.  She is a really strong person but has some deep insecurities.  She has to over come those in the story.

She has two important men in the story. Dev is the captain of the space ship she lives on and is also the leader of the mercenary group that lives on the ship.  He is one of Kat’s anchors.  He is important as a friend and mentor.  Christopher Rygard is the other important man in Kat’s life and he is a love interest.

I like the way both were important and both cared about Kat.  The story line was filled with danger.  There were important side characters that added to the tension in the story.  The interactions and their results were very well written.  While the action in the book was important it was Kat’s reactions to how she had to act that was at the heart of the story.  I loved how Kat was both a typical girl and a very strong woman.  All in all this is an exciting story that set up the next book in the series. It will be fun to see how Kat does in a new role.

I received an ARC of Fighting Kat from Netgalley.
Posted by JC Jones at 12:30 AM