Heirs and Graces (Her Royal Spyness Mysteries #7) by Rhys Bowen 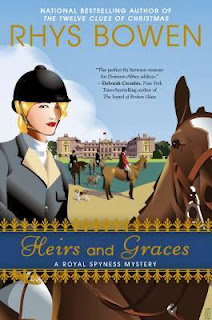 "As thirty-fifth in line for the throne, Lady Georgiana Rannoch may not be the most sophisticated young woman, but she knows her table manners. It's forks on the left, knives on the right, not in His Majesty's back.

Here I am thinking the education I received at my posh Swiss finishing school would never come in handy. And while it hasn't landed me a job, or a husband, it has convinced Her Majesty the Queen, and the Dowager Duchess to enlist my help. I have been entrusted with grooming Jack Altringham, the Duke's newly discovered heir fresh from the Outback of Australia, for high society.

The upside is I am to live in luxury at one of England's most gorgeous stately homes. But upon arrival at Kingsdowne Place, my dearest Darcy has been sent to fetch Jack, leaving me stuck in a manor full of miscreants, none of whom are too pleased with the discovery of my new ward.

And no sooner has the lad been retrieved than the Duke announces he wants to choose his own heir. With the house in a hubbub over the news, Jack's hunting knife somehow finds its way into the Duke's back. Eyes fall, backs turn, and fingers point to the young heir. As if the rascal wasn't enough of a handful, now he's suspected of murder. Jack may be wild, but I'd bet the crown jewels it wasn't he who killed the Duke."

Once again Lady Georgiana is about to be with out a place to stay.  As a heir to the throne (35th in line)  she is not allowed to work but has no income.  Again at the last minute she asked to live at a stately manor and provide help for Jack Altringham, the long lost heir to the Dukedom.

Of course there is a murder.  The current Duke, Cedric, is found dead with a knife in his back.  Georgiana is the one to find him.  On the bright side Darcy is also on the scene.  Most of the favorite characters are back.  Darcy and Georgiana still are in love but have no money to marry.  Georgina does help solve the murder and is in danger for a few pages but all ends well.  She even ends the book with a place to stay for the next few weeks or months.

I loved the character of Jack.  He is a breath of fresh air in the Duke’s house whole.  He is fresh from the Australian outback and has no desire to be a Duke.  It is fun to watch him react to British upper class in the 1930’s.  By the end of the book you could tell that he will be a great addition and will put his title to much better use than his uncle.

Heirs and Graces continues the fun that was in previous book in Her Royal Spyness Mysteries.  It is a great addition to the series and I am looking forward to seeing what is in story for Georgiana in the next book.