Romancing The Duke (Castles Ever After) by Tessa Dare 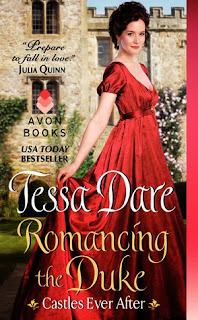 "In the first in Tessa Dare's captivating Castles Ever After series, a mysterious fortress is the setting for an unlikely love . . .

As the daughter of a famed author, Isolde Ophelia Goodnight grew up on tales of brave knights and fair maidens. She never doubted romance would be in her future, too. The storybooks offered endless possibilities.

And as she grew older, Izzy crossed them off. One by one by one.

Now Izzy’s given up yearning for romance. She’ll settle for a roof over her head. What fairy tales are left over for an impoverished twenty-six year-old woman who’s never even been kissed?

I don’t know how Tessa Dare comes up with these ideas for book series but I am so glad that she does.  I really did not think she could match the Spindle Cove series but with Castles Ever After she has come up with at the very least a match.

What happens when you mix an old run down castle, a woman out of resources and a man hiding from the world.  What happens in Romancing the Duke is a fun read full of romance, drama, secrets, and most of all fun.  That is what Tessa Dare does best; she gives her readers a great story filled with scenes full of laughter.  Izzie finds that her fairy tale does come true when she inherits an old castle complete with the man to make her dream come true.

Romancing the Duke is a great start to the Castles Ever After.  I can’t wait for the next woman to find herself with a castle and of course a man to make the fairy tale come true.

Avon published Romancing the Duke by Tessa Dare in 2014.

I received an ARC of Romancing the Duke from Edelweiss.
Posted by JC Jones at 12:00 AM