To Tempt a Viking (Forbidden Vikings #2) by Michelle Willingham 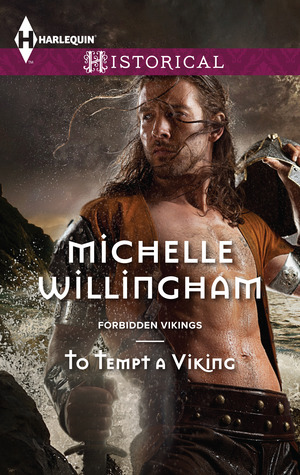 
"She’s Testing His Resolve!
Warrior Viking Ragnar Olafsson stood by as his best friend claimed the woman he desired the most. There was only one way to quench the deep darkness within him—become merciless in battle.
When Elena is taken captive, fearless Ragnar risks everything to save her. Now they are stranded with only each other for company. Suddenly every longing, every look, every touch is forbidden. Elena could tempt a saint—and sinner Ragnar knows he won’t be able to hold out for long.

I loved To Sin With a Viking, the first book in the Forbidden Vikings series and was looking forward to Ragnar and Elena’s story.  I was a little disappointed.  This is a story of unrequited love by Ragnar’s  and on Elena’s side unrecognized love.  It just took to long for the two to realize that they belonged together.  With that as a premise there should have been a lot of tension.  There was some but not enough for me.

I did like the view into a period that I knew little about.  It was interesting to see how the Vikings settled in Ireland and to learn a little more about that time period.  I will try the next book in the series.  This is a time ripe with possibilities.