Skies of Gold (The Ether Chronicles) by Zoe Archer 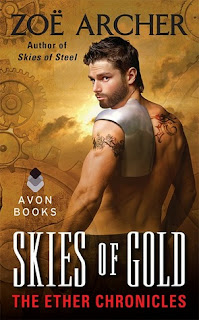 "Kalindi MacNeil survived the devastating enemy airship attack that obliterated Liverpool, but even her engineering skills can't seem to repair her broken heart. Seeking to put her life back together, Kali retreats to a desolate, deserted island--only to discover she's not alone. Captain Fletcher Adams, an elite man/machine hybrid, a Man O' War, crashed his battle-damaged airship into the island after the destruction of Liverpool, never expecting to survive the wreck. But survive he did.

Believing he is nothing but a living weapon, Fletcher is wary of his newfound companion--a pretty, damaged, but determined young woman. Together they are stranded on the island, and it is only a matter of time until desire gets the best of them both. Soon Kali and Fletcher each find that they may be just what the other needed. But a danger from beyond the island puts them to the test. Will it rip them apart or bond their hearts forever?"

I though I had read all of The Ether Chronicles but somehow I missed reading Skies of Gold when it first came out.  I discovered it a few days ago when Marline Harris listed it as one of the best ebook romances of 2013.   I really like this series and I am sad to find out this is the final book.

Both of the characters in the series are wounded but in very different ways.

Kalindi MacNeil is a engineer who creates wonderful inventions.  One is her artificial leg, created after she loses her leg in an enemy airship attack.  She wants solitude to recover and is on the island by choice.

Fletcher Adams is there by chance.  He crashed his airship after helping defeat the enemy in the battle where Kalindi was injured.  He is injured in a different way.  He is Man of War and has been rejected by the woman he though he loved.  After the battle he thinks all he is good for is killing other people.

Skies of Gold is a great addition to The Ether Chronicles.  It has it all; romance, danger, and two wonderful characters.  I was pulling for them from the first meeting and I was not disappointed in how everything progressed.   Skies of Gold can be read as a stand-alone but read the entire series.  You won't be disappointed.

Avon Impulse published Skies of Gold by Zoe Archer in 2013.
Posted by JC Jones at 12:30 AM