A thrilling new SF romance from the author of Ghost Planet and The Ophelia Prophecy.

Tess is a parapsychologist, devoting her life to studying paranormal and psychic phenomenon. But when doppelgangers begin appearing from a parallel world, all her training couldn’t prepare her for what is to come.

Jake appeared from another Earth, shocked and angry, and is restrained by government investigators for study. But when he unwittingly steals energy from Tess, it causes a ripple effect across two worlds.

Ross is an FBI agent, ordered to protect Tess as she conducts her research into this dangerous phenomenon. His assignment was not random—he and Tess have a history. And when those feelings resurface, Ross will have to choose between his love for Tess and his duty to protect his world.
* * * 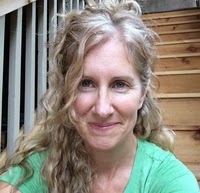 Three-time RWA Golden Heart finalist SHARON LYNN FISHER lives in the Pacific Northwest, where she writes SF/fantasy and battles writerly angst with baked goods, Irish tea, and champagne. A Romance Writers of America RITA Award finalist and a three-time Romance Writers of America Golden Heart Award finalist, Sharon Lynn Fisher writes stories for the geeky at heart—meaty mash-ups of sci-fi, suspense, and romance, with no apology for the latter. She lives where it rains nine months of the year. And she has a strange obsession with gingers (down to her freaky orange cat). Her works include Ghost Planet (2012), The Ophelia Prophecy (2014), and Echo 8 (2015). Aboutme/SharonLynnFisher. @SharonFisher. Facebook. Goodreads.

* * *
Praise for the works of Sharon Lynn Fisher:

“I have a winner! This is a really fun Sci-Fi romance.... Very cool setup and characters that I couldn't put down...I loved it!”
—Felicia Day, actress, blogger, and geek, on Ghost Planet

“Fisher…returns with a sexy, irresistible take on the enemies-to-lovers trope… [her] light touch guarantees that the development of this slow-burn romance feels authentic, organic and totally satisfying.”
— RT Book Reviews on The Ophelia Prophecy