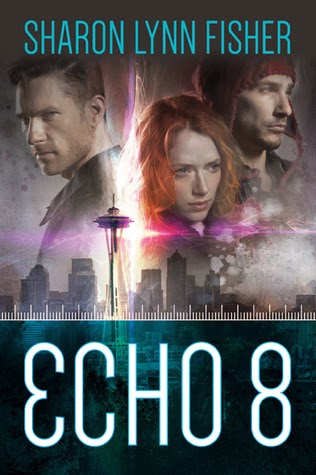 Sharon Lynn Fisher has not taken the easy way with any of her first three books. In each she has written stand-alone books that require new world building, back-story and character development.  In Echo 8 there are not one but two complex worlds.  Both are a version of Earth but both are very different.  One has been almost destroyed by an asteroid strike and one is still OK.  I could not decide if one was our Earth or not.

What brings them together are the Echo’s.  These are people pulled into Tess and Ross’s earth when the asteroid strikes an alternate Earth.  That brings me to the character development required to pull this off.  Each character is an echo on the other Earth and to survive on the alternate Earth they have to pull energy from someone.  A process that often kills the donor.  Enter FBI Agent Ross McGinnis and Parapsychologist Tess Caufield and Jake who is Echo 8.

McGinnis wants to protect Tess.  Tess wants to keep Jake alive.  Jake does not want to kill anyone when he feed to stay alive.  Thus starts an adventure that spans both Earths.  Ross, Tess, their doubles and Jake travel between both Earth’s as they try to help on one and keep the Echo’s safe on the other.

There are numerous twist and turns to this story.  While all of those develop Tess and Ross first clash and then don’t as they work together.  There is adventure, romance, danger and more romance as the story comes to a very satisfying conclusion.

You are in for a treat whether this is your first or third Sharon Lynn Fisher book.  If this is your first you will want to try Ghost Planet and The Ophelia Prophecy while you wait for her next book.
Posted by JC Jones at 12:00 AM