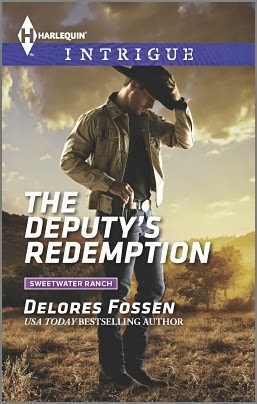 The woman fleeing a cold-blooded killer is no stranger to Deputy Colt McKinnon. Fourteen years ago, Elise Nichols was the love of his life. Now she's back in Sweetwater Springs—to be the star witness in an upcoming murder trial that could tear the Texas lawman's family apart.

With her explosive revelations certain to rock the town, Elise didn't expect to be welcomed home with open arms. Certainly not by the cowboy with the badge who once meant everything to her. But after being run off the road and shot at, she has no choice but to trust him. Even more dangerous is the desire that's reigniting, making Elise yearn for something she may not live to see.

Ok Delores Fossen!! Would you quite teasing us and finally solve the 20 year old murder!!  I know we got closer this time.  Elise did remember enough to clear one person but had nothing that pointed to the real killer.  I do have one person I think might have done it now.  Only time will tell if I am right.

Enough of my rant.  I did like the story and two main characters.  Colt McKinnon and Elise Nichols have a history.  When they are thrown together romance rears it head again.  Someone is trying to kill Elise and it is not hard to find more than one suspect.  Colt is the one protecting her.  That means they are together 24 seven.  In addition to romance there is a lot of tension and danger throughout the story.

The plot is interesting, the two main characters keep setting off sparks and the story arc for the series is still developing.  The Deputy’s Redemption can stand-alone but is much better if you start with book one.  All of the books are quick reads so it would not take you long to catch up.

Harlequin published The Deputy’s Redemption by Delores Fossen in 2015.

I received an ARC of The Deputy’s Redemption from Netgalley in return for an honest review.
Posted by JC Jones at 10:35 AM