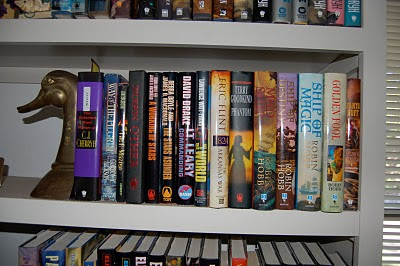 Found On My Hardcover Shelf

I have books by several of my favorite authors whose last names start with D.

I found David Drake's Daniel Leary series when it first came out. Baen publishes the series and I have several of them as eBooks. Lt. Leary Commanding is the only one in the series I have as a hardcover. This is a male/female paring where there is friendship but no romance between the two main characters. Start this series with With the Lightning.

Debra Doyle and James D. MacDonald wrote the Mageworlds series. The series has seven books and is great space opera. I had the early books in paperback but one of my sons packed them up with his books when he moved out. I keep trying to get them back but so far no luck. I have The Stars Asunder and A Working of Stars in hardcover. Start with The Price of Stars.

Gordon R. Dickson is another author who is a must have if you love Science Fiction. I have The Way of the Pilgram, Other and The R-Master in hardcover.
Posted by JC Jones at 4:19 AM