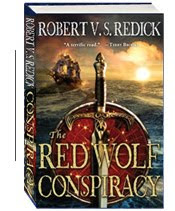 Redick does his world and character building using a series of diverse scenes containing a variety of different characters. Each scene provides important glimpses into the characters and history of the world he is building. This technique could result in chaos but Redick never loses the momentum of the story. The result is a book that grabs your attention and never lets it go.

At the heart of the story is an arranged marriage that will bring peace. Nothing is as it seems on the surface. You think you have a handle on a character only to find that their actions walk a complex and confusing path. You think you can predict what is coming next and something entirely different happens.

As this is the first book in a four book series The Red Wolf Conspiracy leaves many loose ends. Luckly I will not have to wait long to continue the story. Ruling Sea, the next book, is already out.

I purchased The Red Wolf Conspiracy from Amazon.
Posted by JC Jones at 12:27 PM