Cry Wolf (An Alpha and Omega Novel) by Patricia Briggs 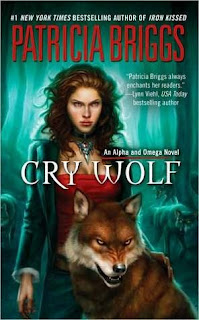 "Anna never knew werewolves existed, until the night she survived a violent attack... and became one herself. After three years at the bottom of the pack, she'd learned to keep her head down and never, ever trust dominant males. Then Charles Cornick, the enforcer—and son—of the leader of the North American werewolves, came into her life.

Charles insists that not only is Anna his mate, but she is also a rare and valued Omega wolf. And it is Anna's inner strength and calming presence that will prove invaluable as she and Charles go on the hunt in search of a rogue werewolf—a creature bound in magic so dark that it could threaten all of the pack."

I started this series backwards.  I checked out Fair Game as an audio book.  I did not realize that it was a side series instead of a Mercy Thompson book.  I am glad I didn’t because I loved Anna and Charles and wanted to know more about them.  I put Cry Wolf on reserve at my local library. I waited a month but whoever had the book never returned it.  (I hate that when it happens).  Barnes and Noble put out a 15% off coupon so I purchased Cry Wolf instead of hoping the book would ever be returned.

World Building:  Most of this world was created in the Mercy Thompson series.  Cry Wolf is set before the start of the Mercy series but because it was written after that series there is little world building in Cry Wolf.  There is some cross-over between the two series.  I did feel I might have missed some references as I have only read the later Mercy books.

Characters:  Charles is his father’s enforcer or paid assassin.  He has little softness in him, is a dominant wolf and seems an odd mate for Anna.  Anna is an Omega wolf who has been told she is a submissive.  In truth she is the one wolf who cannot be ordered by anyone.  She brings an odd calm to any wolf she is around and is a balm to Charles battered soul.  They are the two main characters in the book.  The one thing that is jarring in the book is the fact that you do not get to see Anna and Charles meet.  That story is in On the Prowl an anthology published a year before Cry Wolf.  It is not included in the copy of the book I purchased although I think it is in some later editions.  I suggest you find and read that short novella before you start Cry Wolf.  If you do not you will feel a little lost as the story starts where the novella ends with no backstory or introduction.  There are other important characters in the story: Bran Cornick, the Marrok, or leader of all werewolves in North America and Charles father, Walter Rice who has hidden in the mountains near Charles house for 30 years, and Ansil an old werewolf whose secret is the basis for the plot in the story.  While character development is not at the heart of the story I did feel I knew enough about each character and they fit the story.

Plot:  Bran’s pack is a mix of werewolves who have problems as well as secrets.  Ansil has hidden much of his secret from Bran and now it has come back to haunt Ansil, Bran and Charles.  As the enforcer Charles is tasked with going into the mountains to fix the problem and Anna insists on going with him. Nothing is as it seems and as the story progresses everything begins to unravel and everyone is in more and more danger.

Tension:  The hunt in the mountains provided the external tension in the story.  That tension just continues to build as the book progresses.  The internal tension comes from the Charles and Anna.  They are new mates, do not know each other that well, and the mating bond is not in place.  The hunt does not leave them time to sort some of the issues out in a calm manner and produces tension between the two.

Writing:  All of Patricia Briggs’ books are well written and Cry Wolf is no exception.  While some scenes are written in the passive most of the book is very active.  Dialog and action keep the story moving.  The passive fits the story as it comes from both Charles and Anna’s internal struggle with the mating bond.

I am looking forward to future books featuring Charles and Anna.  They are both great characters with the potential for many future stories.

ACE published Cry Wolf by Patricia Briggs in 2008.
Posted by JC Jones at 1:00 AM