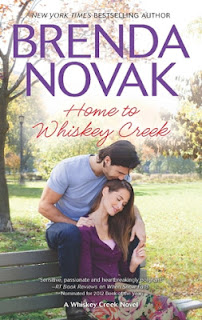 Sometimes home is the refuge you need-and sometimes it isn't Adelaide Davies, who's been living in Sacramento, returns to Whiskey Creek, the place she once called home. She's there to take care of her aging grandmother and to help with Gran's restaurant, Just Like Mom's. But Adelaide isn't happy to be back. There are too many people here she'd rather avoid, people who were involved in that terrible June night fifteen years ago.

Ever since the graduation party that changed her life, she's wanted to go to the police and make sure the boys responsible-men now-are punished. But she can't, not without revealing an even darker secret. So it's better to pretend....

Noah Rackham, popular, attractive, successful, is shocked when Adelaide won't have anything to do with him. He has no idea that his very presence reminds her of something she'd rather forget. He only knows that he's finally met a woman he could love.

Adelaide Davies is the victim.  She never reported the crime and left Whiskey Creek as soon as she graduated from high school.  Now she is back to take care of her Grandmother.  The men responsible feel threatened and Adelaide is in danger.  Adelaide is a very strong character but she has not been able to put the crime in the past.

Noah Rackham is the brother of one of boys.  His brother is dead and his family does not know what he did.  Noah is attracted to Adelaide and does not understand why she keeps saying that they have no future together.  He has the strength to stand by Adelaide when the truth comes out.

Both have to grow and develop during the story.  In the end they are a very powerful couple.

I said that Novak does not shy from difficult subjects.  One of the continuing characters in the series is gay.  He finally comes out of the closet in Home to Whiskey Creek.  This side story plays into the story as a whole.  It will be interesting to see how Brandon’s story is handled in future books.

Home to Whiskey Creek is a powerful story filled with tension.  I am not sure I could have handled everything like Adelaide did.  She and Noah had to make some very hard decisions for the story to have an HEA.  Not everyone will agree with how it ended or if they could have done the same.

I received an eARC of Home to Whiskey Creek from Netgalley.
Posted by JC Jones at 1:00 AM