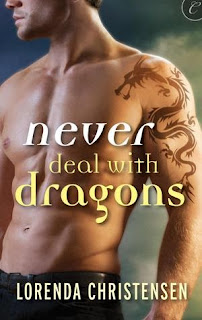 "Consoling a sobbing dragon and serving pig buffets are just part of the job for Myrna Banks. Working for a mediation firm, it's her job to get humans compensated for damages caused by the dragons who now rule. But her "typical" day is interrupted by Trian Chobardan, an old flame who sneaked out of her bed two years ago, taking her heart and a handful of classified documents with him.

Myrna would love to show Trian the door, but he's been sent by North America's reigning dragon lord for help negotiating a truce with a powerful rival to avert war. Myrna agrees to help, even though she'll be stuck with Trian as a partner.

As the two work together, Myrna finds Trian to be surprisingly supportive—and still irresistibly attractive. Though her brain tells her not to forget his betrayal, her body feels differently. When they learn the enemy dragon lord is planning something no one could have imagined, Myrna has to learn who she can trust before she loses not only her heart, but her life."

Never Deal with Dragons appears to be the first published book by Lorenda Christensen.  I have to say that she knocked the ball out of the park with the story.  Here is why:

Worldbuilding:  This is a complicated world and I understood it immediately.  The world building shows up throughout the book.  It is wrapped in dialog and shows up at just the right points.  Within a few pages I understood the basics and those were presented in an active not a passive voice.  That method continued throughout the book.  Very, Very difficult to do and very well done.

Characters:  Myrna Banks and Trian Chobardan are the two main characters.  The book opens with a scene featuring Myrna and the basics of her character are presented there.  Again it is done within the context of the story and is developed as the book moves forward.  Trian is more of a mystery but it is a mystery that fits the story.  There are a few clues to who or what Trian is.  See if you spot them.   There are some very well developed side characters that are essential to the story.  The dragons are the least developed as this story focuses on the humans and how they deal with dragons.

Plot:  Everything builds from the actions of the characters.  What seems simple at first gets more complicated as the story progresses.  Each element is introduced and developed in a progression that keeps the story moving even as surprises are added. Everything moves and builds in a way that kept me reading and in some cases guessing.

Writing:  There is nothing in the writing that interrupts the flow and tension of the story. This is a well-constructed book with excellent writing.

Tension:  There are numerous elements that produce the tension in the story.  There is the past relationship between Myrna and Trian, the problem between the two dragon lords, the relationship between dragons and humans, and the need to prevent a war that would devastate both humans and dragons.

Never Deal with Dragons is a book I could not put down.  There were some unresolved issues at the end so I wonder if it will be the first book in a series.  The world Lorenda Christensen built is large enough for more than one future story.

Carina Press will release NeverDeal with Dragons by Lorenda Christensen on July 22, 2013.  I suggest you preorder so you can start reading immediately.

I received a free eARC of NeverDeal with Dragons from NetGalley.