The Cassandra Project by Jack McDevitt and Mike Resnick 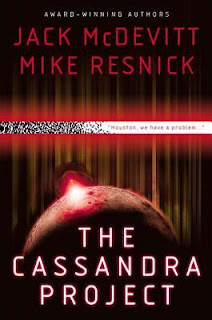 Early in his career, Jerry Culpepper could never have been accused of being idealistic. Doing public relations—even for politicians—was strictly business...until he was hired as NASA’s public affairs director and discovered a client he could believe in. Proud of the agency’s history and sure of its destiny, he was thrilled to be a part of its future—a bright era of far-reaching space exploration.

But public disinterest and budget cuts changed that future. Now, a half century after the first moon landing, Jerry feels like the only one with stars—and unexplored planets and solar systems—in his eyes.

Still, Jerry does his job, trying to drum up interest in the legacy of the agency. Then a fifty-year-old secret about the Apollo XI mission is revealed, and he finds himself embroiled in the biggest controversy of the twenty-first century, one that will test his ability—and his willingness—to spin the truth about a conspiracy of reality-altering proportions."

The Cassandra Project is a cross between science fiction and mystery.  Set in the near future it starts with a tape from a fictional Apollo flight.  (Or maybe like an old television program the names were changed to protect the innocent.)  The flight was before Neil Armstrong’s moon landing but there is an indication that they landed on the back side of the moon before Neil's mission.

Everything develops from there.  I loved the action and the tension that developed as the story unfolded.  The dialog was interesting and the characters fit the story.  The story line allowed the authors to make several observations about how the politics of our time may affect our future.  All in all it is an entertaining read that kept me guessing until the end.

ACE published The Cassandra Project by Jack McDevitt and Mike Resnick in 2012.
Posted by JC Jones at 1:00 AM