Islands in the Sea of Time by S. M. Stirling

Islands in the Sea of Time was our Science Fiction Book Club book this month.  Published by Roc in 1998 this was the first book in a trilogy and it lead to another longer running series.

Everyone liked the book and agreed that putting it as far back in time as the author did made it easier to come up with history.  There is not that much written about 1250 B.C.  Stirling filled the book with character that had the talents needed to survive.  All in all it was agreed it was a exciting and well written book.  It did require that you suspend disbelief but that did not affect anyone’s enjoyment.

If you have never read the book here is what Goodreads says: 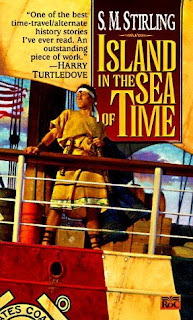 "During a perfect spring evening on Nantucket a violent storm erupts and a dome of crawling colored fire blankets the island. When the howling winds subside and the night skies clear, the stars appear to have shifted. The mainland has become a wilderness of unbroken forest, where tools of bronze and stone litter the beaches, and primitive natives scatter in terror.

A startling phenonomenon has occurred; The island of Nantucket has been swept into the long-ago past. With its inhabitants adrift in the year 1250 B.C., there is only one question to be answered: Can they survive?

A provocative and endlessly inventive spin on the classic adventure story, Island in the Sea of Time takes you on a journey of wonder, discovery, and imagination."

The other series starts with Dies the Fires and is the story of what happened to the rest of the world when Nantucket get pulled back to 1250 B. C.  Just a hint, Nantucket was the best place to be when everything happened.
Posted by JC Jones at 1:00 AM