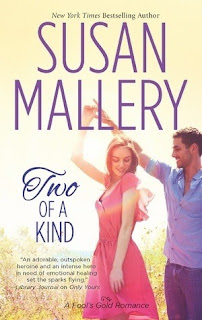 Felicia Swift never dreamed she'd hear a deep, sexy voice from her past in tiny Fool's Gold, California. The last time Gideon Boylan whispered in her ear was half a world away...on the morning after the hottest night of her life. Her freaky smarts have limited her close friendships, and romance, but she came to Fool's Gold looking for ordinary. Gorgeous, brooding Gideon is anything but that.

Black Ops taught Gideon that love could be deadly. Now he pretends to fit in while keeping everyone at arm's length. Felicia wants more than he can give-a home, family, love-but she has a lot to learn about men...and Gideon needs to be the man to teach her.

As these two misfits discover that passion isn't the only thing they have in common, they just might figure out that two of a kind should never be split apart."

Two of a Kind is the most recent book in the Fool’s Gold series.  For those not familiar with the series Fool’s Gold is a town California.  It is in the hills where gold was once discovered but here there was only Fool’s Gold.

Characters:  Felicia Swift and Gideon Boylan are the two main characters in this story.  Felicia is a very smart woman who just wants to be normal.  She is a great character who is very honest, does not really understand small talk and has some great lines in the book.  She offers TMI in conservations and it is always funny.  I had some good laugh out loud moments reading her scenes.  Gideon is ex-military and has closed down his emotions after being a captive for 2 years.  Many of the characters from previous books play a part in Two of a Kind so you get to visit with old friends during the story.  You also get to meet some new possibilities for future Fool’s Gold stories.

Story:  Felicia and Gideon’s journey to an HEA is not smooth.  There does not seem to be any way for them to work until Mallery uses Gideon’s unexpected and unknown son trope.  It was a way to get Gideon to unlock his emotions but for me it was not that smooth a transition.  It just landed in the middle of the book and it did not blend smoothly like I expected from previous books.

Writing:  Susan Mallery is a good writer who turns out enjoyable books.  Two of a Kind is just that.  It is a well-written enjoyable read but not one that I could not put down.  I like some of the previous books much better.

Even though Two of a Kind is part of a series it works well as stand along novel.

Harlequin HQN published Two of aKind by Susan Mallery in 2013.

I received a print copy of Two of a Kind from Amazon Vine.
Posted by JC Jones at 1:00 AM